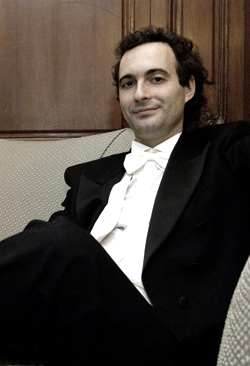 Hailed by critics all around the world (Fanfare, New York at Carnegie Hall Concert reviews, Musica), Gianluca Luisi is considered today one of the most interesting Italian pianists of our time.
A winner of numerous competitions, Gianluca Luisi graduated the Conservatory of Pesaro with honours and studied later at the Incontri col Maestro International Academy in Imola and with Aldo Ciccolini in Naples and Paris. He received the first prize at the 4th International J. S. Bach competition in Saarbrucken-Würzburg in 2001. On this occasion the Saarbrucken Zeitung wrote: “The young man is a great Bach interpreter… He makes music absolutely naturally. What more do you want?”
Since then Gianluca Luisi has performed in prestigious halls around the world, such as the Musikverein in Vienna, Carnegie Hall in New York, Teather Bellini in Catania, San Carlo in Naples and the New Auditorium of Milan. He was guest at international music festivals such as the Rarity Piano Music Festival in Husum (Germany), Tiroler Festspiele (Austria), the Rossini Festival (Pesaro), Schleswig-Holstein Music Festival (Hamburg) and Bach Festival Leipzig. He extensively toured the U.S.A., Japan and China.
Gianluca Luisi has been soloist with orchestras like the Internationale Deutsch Kammerphilharmonie (Frankfurt), Dubrovnik Symphony Orchestra, Ensemble of the Hessischen Rundfunk Symphony Orchestra, Ensemble Chantilly (Berlin), San Carlo Orchestra (Naples), Marche Philharmonic Orchestra, Symphony Orchestra Rossini, Orchestra Sinfonica Siciliana, Kasugay Symphony Orchestra (Japan) and others.
Luisi received enthusiastic critical acclaim for his interpretation of Bach’s works, among others – the complete Well-Tempered Clavier by J.S. Bach which he recorded for the American label Centaur. The Fanfare and American Record Guide magazines described his recording as an absolute reference; the magazine “Piano News” (Düsseldorf) rated the recording with 6 out of 6 stars.
Besides the complete cycle of the WTC, Gianluca Luisi recorded the Six Partitas, Six English Suites and Six French Suites for Aevea Onclassical label as well as the concertos for two pianos for Decca Int. Label. In total, Gianluca recorded 28 CD’s.
He was invited to the jury at the prestigious Tschaikowsky competition for young pianists in Montreux in Switzerland. Since 2011 he has been the artistic director of the historical “Pianist Cup” competition, of the “Osimo Piano Hours” Festival and in 2015 he was awarded the honorary citizenship of the city.
Luisi is a member of the Shenzhen Artstar Cultural Community Co. LTD and the International Piano Museum Organizing Centre of Shenzhen (China). He is a guest professor at the Academy of Imola “Incontri col Maestro”, at the Music Academy of Pescara, at the Marche Piano Academy advanced course in Recanati, at the Engadin Summer Piano Academy, at the Umberto Giordano Conservatory of Foggia and the Giacchino Rossini Conservatorio in Pesaro. He has led postgraduate courses in many American universities (Portland George Fox, Nevada Las Vegas, New York Westminster Conservatory, Lower Columbia College Washington, Denver State University Colorado), at the Saarland Hochschule, in Japan (Nagoya) and at the Shanghai Music Conservatory in China.
“Luisi’s piano playing was astonishing in presentation. He is a very strong and imaginative artist, an excellent pianist who deserves world recognition.” New York Concert Review
“The playing of pianist Gianluca Luisi is technically and musically superb.” Expedition Audio Reviews
“…an evening with a world-class pianist!” Nordbayerischer Kurier
“Gianluca Luisi revels in the lush outpouring of J. Marx: rarely can a fugue have sounded less academic and more freely expressive as it builds towards its effulgend end.” Gramophone