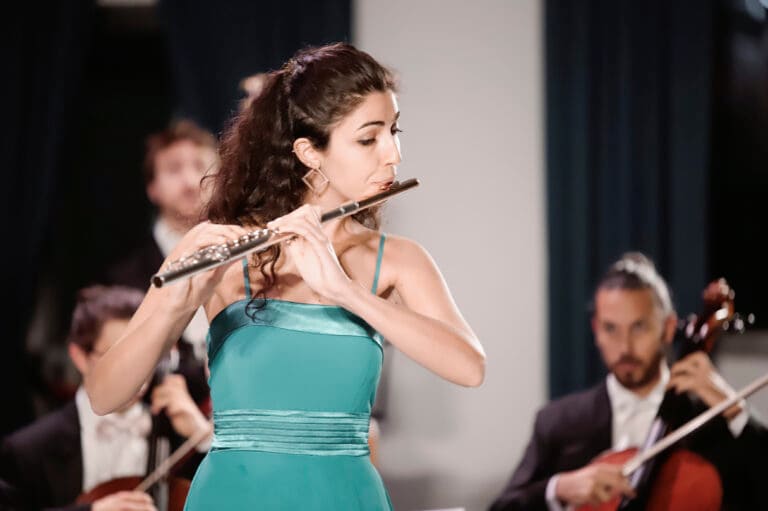 Born in Rome in 1999, she graduates with honors at the age of only fifteen from St. Cecilia Conservatory of Music under the guidance of F. Albanese. She continues her studies at Accademia Nazionale di Santa Cecilia with A. Oliva and at the Scatola Sonora Academy of Rome with M. Marasco, and she attends the chamber music advanced course at the School of Music of Fiesole in the class of G. Pretto.
She is then admitted to the “Académie Supérieure de Musique” of Strasbourg (France) in the class of M. Caroli, where in 2019 she completes her Bachelor of Music with honors. She’s currently obtaining her Master of Music course at the Universität Mozarteum of Salzburg (Austria) with Prof. M.M. Kofler.

In 2021 she wins the Academist position in the Münchner Philarmoniker Orchestra, with chief conductor M° Valery Gergiev.

She has taken part in several masterclasses with the most influent flutists in the world, such as P. Gallois, P. Taballione, J. Ostry, S. Careddu, U. Miilmann, A. Lieberknecht, M. Moragues and many others. In 2017 she is selected to attend the Neflac Summer Academy with Emily Beynon, at the end of which she has the chance to perform a chamber music programme at the Concertgebouw in Amsterdam.

She participated to important Festivals on the international scenario and she collaborated with R. Muti, A. Pappano, C. Rizzari, S. Mercurio, B. Canino, G. Pretto, B. Aprea, E. Morricone, T. Guschlbauer, D. Rustioni, X. Zhang, M. Pitrenas, J.P. Wurtz, D.R. Davies and many others.
Since 2007, she covered the role of Solo-Flutist in several orchestras and she has been invited as guest player in well-known institutions among which Luigi Cherubini Orchestra, Italian Youth Orchestra OGI, St Gallen Sinifonieorchester, International Orchestra of Rome, JuniOrchestra of St. Cecilia Academy, Italian Conservatories’ Orchestra, HEAR’s Orchestra of Strasbourg, Franco Ferrara Orchestra.

Devoted to contemporary music, she often performs "prèmieres", as a soloist and with chamber groups. She regularly collaborates with Imago Sonora Ensemble and Accademia Filarmonica Romana and, as an active member of Pentarte Ensemble, in 2017 she recorded a CD for the label LEAD RECORDS. Many pieces have been written for her over the last years, among which “Notte di Luna” for solo flute by F.M. Capogrosso (2018), “IoVis” for solo flute by F. Buonpane (2019) and “Immagini Sonore” for solo flute by A. Di Gianfelice (2021). She is deepening the study of baroque music and ancient instruments with Patrick Blanc and Marcello Gatti. With the Traverso Flute she performed as a soloist with the Baroque Orchestra of the HEAR in Strasbourg and in summer 2019 she was selected to participate at the Génération Baroque Project, performing in Aosta, Novara and Strasbourg under the baton of M. Gester.
From 2017 to 2019 she covered the role of Flute and Chamber Music Professor of the Municipal Music School of Mertzwiller (France).