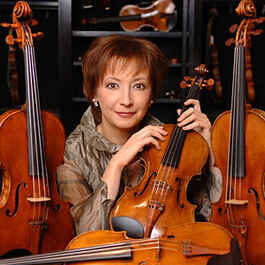 As an ambassador of the magic of sound Elena Denisova is among one of the most charismatic figures of the international violinist elite. Wherever she performs the press certifies her musical maturity, absolutely individual interpretation and superior virtuosity.

not only of classical music, but also of contemporary pieces. Numerous works have been devoted to her by contemporary composers; some of them are perpetuated on CDs.

Denisova was the student of David Oistrakhs favorite students Valery Klimov and Oleg Kagan, and started her amazing career in 1990, which led her to performances with great orchestras (including Royal Philharmonic Orchestra Lodon), numerous festivals (including Salzburger Festspiele) and prestigious concert series (including the Vienna Musikverein).

She founded the Austrian Gustav Mahler Association, the Gustav Mahler Ensemble, the String Orchestra Collegium Musicum Carinthia and the Classic Etcetera Music Association, and has been the director of the Wörthersee Classics festival, since 2002.

Wherever Denisova performs, she touches and fascinates her audiences and critics: "Absolument Remarquable" beamed the French newspaper Le Courier Picard; "Incredible, this Denisova," said the Hamburger Time; "Worthy of serious investigation," it says in the magazine The Strad about the always authentic, for all its charisma sympathetic and humble artist.