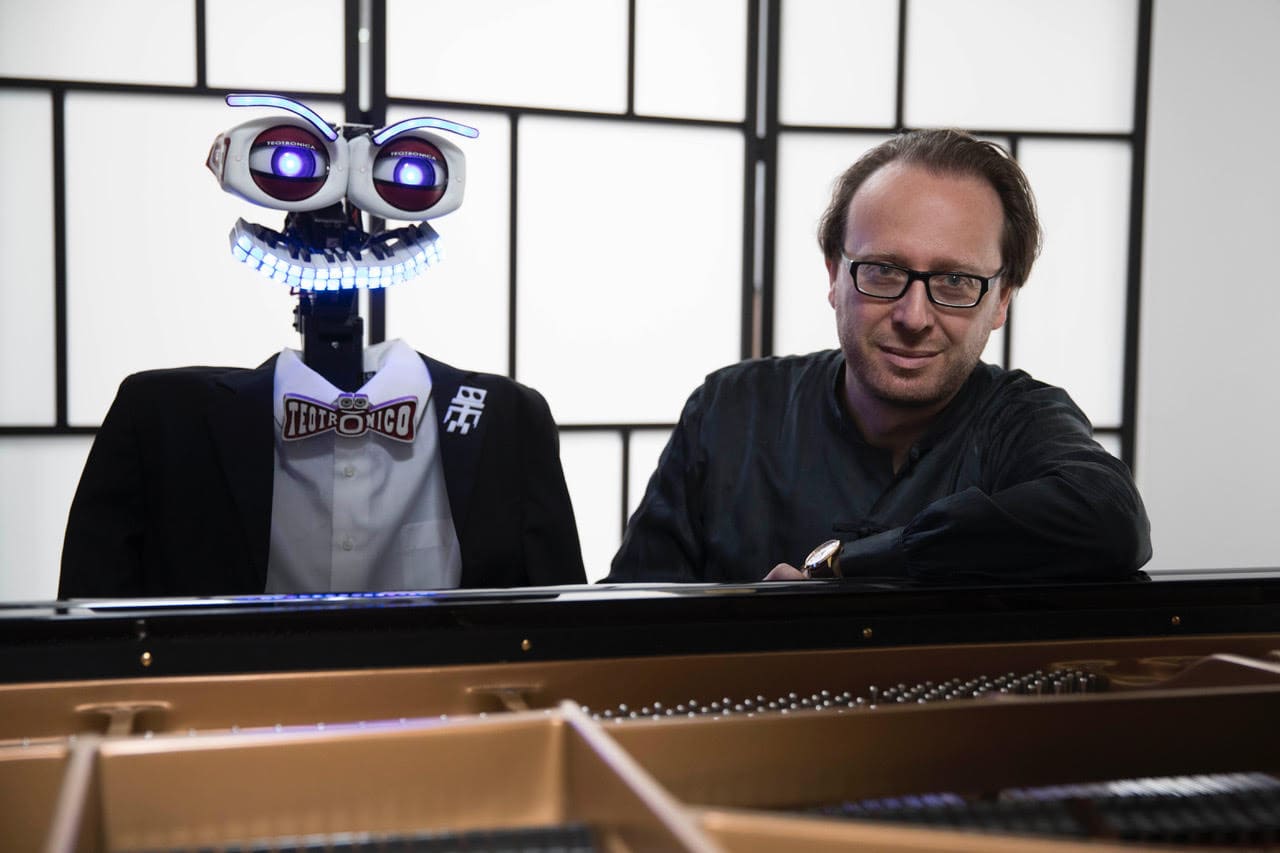 TeoTronico
TeoTronico is a pianist robot, conceived and designed by Matteo Suzzi at TeoTronica company, based in Imola. Version 1.0, with 29 fingers, was completed in 2007. Starting from version 3.0 (2012), TeoTronico was implemented with 53 fingers driven by dynamically driven electromagnets, able to control the dynamic gradations of any acoustic piano. TeoTronico can read musical scores in digital or MIDI format, playing them on the piano in a literal way. It is also able to reproduce the piano roll recordings (converted into MIDI) of the great pianists of the past. From 2017 TeoTronico is also equipped with feet for the control of the sustain pedal of the piano. In 2012, after having discovered it by chance on Youtube, Italian pianist Roberto Prosseda invited TeoTronico to take part in his lecture-concert on piano musical expression.

TeoTronico is a mechanical MIDI player. It may reproduce a piano score literally, playing it from a midi file: it is therefore an ideal interpreter of repertoire for player-piano by Stravinsky, Hindemith, Nancarrow, Ligeti. TeoTronico can also take the “appearance” of a real pianist piano, playing MIDI files derived from piano rolls recorded by great pianists of the past, such as Busoni, Debussy, Rachmaninoff, Hoffman. It can also play some “mirror-pianist” if connected to a digital piano played by a person (Roberto Prosseda, acting as “ghost-pianist”). In the “mirror-pianist” mode, TeoTronico can also play as a solo pianist with orchestra, in chamber ensembles and accompanist with singers, even remotely, miles away. Teo can also talk, sing and make funny facial expressions. It can reproduce written texts, grant or be dubbed in real time: in both modes, its lips movements are synchronized to the speech, in any language. Thus TeoTronico can interact with its interlocutors, even through his facial expressions: moves his head, mouth, eyes, eyelids and eyebrows. Equipped with proximity sensors, it can turn to the people who are approach it. When dubbed in real time, TeoTronico can answer questions from the audience. It can also perform with other musicians with an impressive versatility, if in “mirror-pianist” mode, with the assistance of a professional pianist.

In 2012 TeoTronico made his debut as a soloist at the Philharmonie in Berlin with the Berliner Symphoniker in a special family concert. TeoTronico with Roberto Prosseda has also played in similar educational contexts with the Sicilian Symphony Orchestra and with Ankara's Baskent Orchestra at the Ankara Music Festival, performing Mozart's K 488 Concert. TeoTronico has performed more than 80 shows with Roberto Prosseda in their unique format “Robot Pianist Vs. Human Pianist”, appearing in the most important Italian concert venues, such as Teatro Pavarotti in Modena, Teatro Bibiena in Mantua, Politeama in Palermo, Museo del Violino in Cremona, and in several concert halls in Europe and Asia, such as the Xing Hai Concert Hall in Guangzhou, the Beijing Concert Hall in Beijing, the Symphony Hall in Shanghai, the Seongnam Arts Center of Seoul. On January 30th 2016 TeoTronico was the protagonist of an episode of the "It's Not Rocket Science" program broadcast in prime time by the English broadcaster iTV1. The robot also appeared on television programs of Discovery Channel (Canada), Channel 5 (UK), KBS and SBS (Korea). In 2017 he was invited by Chinese TV Hunan TV to play a duet with the famous soprano Zhang Ye, and by CCTV 1 for a television show with Lang Lang. He was also the protagonist of the World Robot Conference held in Beijing from 23 to 27 August 2017. TeoTronico is dedicatee of new compositions written ad hoc for its “expressive means” by various composers, including Nicola Campogrande, Stefano Ianne, Gabrio Taglietti and Michael Glenn Williams. TeoTronico also performs in singing and piano concerts, with pop and rock repertoire from the '70s and '80s.

What is the difference between music reproduction and interpretation? What does “rubato” mean? How is it possible to change the phrasing and expression of a classical music work, still respecting the composers’ ideas?

The debate on the role of the interpreter has been open for many decades. It has often been discussed how an interpreter can go towards a personal-creative-arbitrary interpretation of the score. This concert-challenge is intended to renew the piano recital format and to give the public more incentives for a conscious, critical and participative listening.
In this unique project, a human pianist, Roberto Prosseda, challenges a robot-pianist, TeoTronico. They will play the same pieces and the audience will notice how different they can sound, depending on the interpretation. The robot literally follows the indications in the score, without adding anything to it, while Roberto Prosseda adds what we call “interpretation”. Roberto Prosseda and TeoTronico will also discuss and debate their own performances, commenting and criticizing each other, in order to stimulate a better perception of the music from the audience.
Music can give a deeper meaning to our existence. Learning how to listen is certainly one of the most important steps for growth. Today our lives are increasingly invaded by technology, and it is important not to lose our identity and the awareness of our emotions.