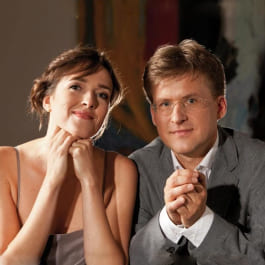 Vilija Poskute and Tomas Daukantas come from the Baltic region. After initial studies at the music conservatory in Vilnius, Lithuania, they perfected their skills at the conservatories in Zurich/Winterthur, Switzerland and Rostock, Germany. Among their teachers were Konstantin Scherbakov, Friedemann Rieger and Hanz-Peter and Volker Stenzl.

In 2000, the two pianists decided to join forces and formed a piano duo. The piano duo is considered one of the most challenging forms of chamber music - it usually takes years for an ensemble of this type to achieve mastery.

In 2005, Poskute and Daukantas won at the coveted ARD Music Competition. Organized by the German Association of Public Broadcasters, the ARD Competition is one of the most important of its kind and has helped launch the careers of many acclaimed artists.

In 2011, the piano duo won the Concours Grieg in Oslo; that same year, Vilija Poskute received the sponsorship award of the city of Winterthur.

The piano duo’s exceptional artistic vision is documented on a number of CD recordings. The German ARS music label released the duo's first CD with world premiere recordings of works by Camille Saint-Saëns. In 2006 the duo recorded their second CD with the music label Euro Classics in collaboration with DRS 2 under the title Reminiscences, featuring works by Wolfgang Amadeus Mozart, Franz Liszt and Lowell Liebermann. The next recording featured some of Saint-Saëns’ more well-known and spectacular compositions. In 2010 the duo released a recording with works by César Franck, followed a recording with works by Edvard Grieg (2013).

The most recent CD is dedicated to Camille Saint-Saëns, Works for Piano Duo, vol. 3.