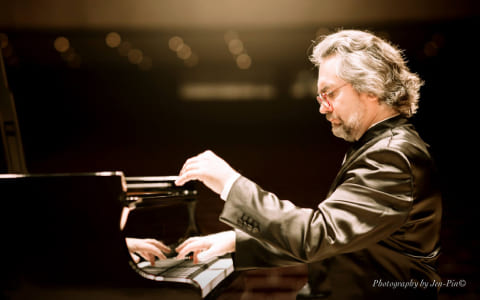 The Russian-Swiss pianist Konstantin Scherbakov is the winner of the 1st Rachmaninoff Piano Competition in Moscow (1983). The 20-years-old pianist’s phenomenal victory with the Rachmaninoff’s less known 4th Concerto carried a symbolic sign: it made the pianist aware of his interest and set his future artistic goals, the first of which was promotion of his compatriot’s music. Pioneering many of Rachmaninoff’s less known works on his many tours of the Soviet Union, later also abroad, Scherbakov launched his career in Western Europe in 1990 playing Rachmaninoff’s Complete Solo Piano Works in four recitals at the XXth International Chamber Music Festival in Asolo, Italy. The great Sviatoslav Richter was present and praised the young pianist’s playing. However it had to be only in 1993 after his concert at the Lucerne Festival when Scherbakov has firmly gained recognition as one of the leading interprets of Rachmaninoff’s music. Neue Luzerner Zeitung proclaimed him the “Rachmaninoff, as of today”.

Konstantin Scherbakov has played Rachmaninoff’s music on all continents during his entire career, both in recitals and as a soloist with orchestras. He shared his passion with many wonderful conductors and thankful audiences. His remarkable discography that counts around 60 CD’s comprises also a disc featuring Rachmaninoff’s piano music (including seldom played Chopin-Variations), as well as a recording of the 2nd and 3rd Piano Concertos with the Russian State Symphony Orchestra.

In 2003, Scherbakov marked the Rachmaninoff’s Anniversary year by giving four concerts that once more covered the composer’s complete solo output. He also appeared with several orchestras performing all four piano concertos and the Paganini-Rhapsody.

During the Rachmaninoff’ 150th Celebration Year, Konstantin Scherbakov will perform Complete works for piano / piano with orchestra around the world.